Refocusing on the Essential & Looking Ahead

There's a saying: the opposite of good isn't bad - it's good intentions. When it comes to maintenance, the right attitude of thinking ahead and looking out for your facility is the way to prevent unnecessary issues and keep everything running smoothly. 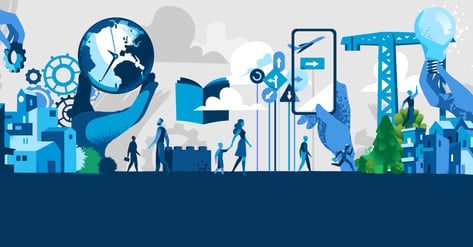 Do you know the story of Prometheus, the Titan from ancient Greek mythology? He was the original philanthropist: he created humanity from mud, brought them fire, and protected them against Zeus' temper tantrums.

Unsurprisingly, art and pop-culture is full of references to Prometheus, making him an immensely popular character in literature, film, and fine art. Remember the 2012 movie? A monitoring software carries his name. And don't forget that Mary Shelley's Frankenstein is sub-titled "The modern Prometheus"!

It's fair to say that Prometheus was a smart guy: the name means "the one who looks ahead." And then there's his little brother, Epimetheus, "he who looks back," who was on the other end of smart.

When Epimetheus married Pandora, he negligently opened her "box" (in the original, it's a jar or barrel) to let out pestilence, diseases, and all the bad emotions - leaving only hope (!) locked up in the container.

Looking In The Right Direction

It's a great story with a great point: besides the philosophical implications, it's a great reminder to think ahead, just like Prometheus. Letting things slip - Epimetheus-style - will only lead to a lot of agony.

In facility management, there are different ways of approaching maintenance - whether scheduled, pro-active, or on-demand. Prometheus would choose the first two options.

Preventative maintenance or scheduled maintenance is pre-emptive action through regular check-ups and upkeep (e.g. exchanging parts, testing systems for flaws). It ensures the functionality and longevity of your machines and assets.

It's also very predictable, easy to plan (ask your CMMS for help!), and required for many insurance and legal reasons anyways - the best of all worlds.

Proactive maintenance includes actions aimed towards finding soft spots in a system and fixing or improving them before malfunctions even show. They are harder to find (it's a needle in a haystack scenario), but can pay off exponentially.

If you can't justify setting work hours aside, encourage your crew to keep their eyes open on the day-to-day or during down-time.

Doing on-demand repair as soon as issues occur is often too late too little - not even speaking of the additional costs for calling an emergency service at 2am on a weekend. Or the unwelcome surprise the Monday after when you find the storage room under water...

Prometheus says: "Don't wing it - plan ahead!" We couldn't agree more: when it comes to maintenance, trying to solve a mess of bad ideas and decisions is the worst option. The way to go is to look ahead and be pro-active.

Do you want to be the Prometheus for your company? Talk to one of our CMMS experts and get a demo. With a little help from our software, your maintenance will feel like a trip to the Elysian gardens.